The entrance to Appleton Dock just to the left at the traffic lights. A good array of cars and trucks caught here. A mid-fifties Austin Loadstar passing a battered Volkswagon Kombi van. Behind them is a 6-cylinder Morris Commercial LC trying to get enough speed up to join the traffic flow before being collected by the Bedford ‘S’ Model carrying a heavy load of compressed bales of sheep’s hides. The Morris Commercials were excellent trucks but slow when loaded. Closely following the S Model is a Bedford J model. A Morris J van can be seen travelling in the opposite direction. 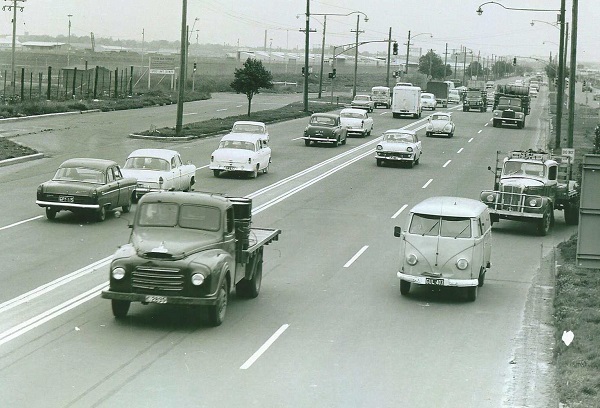 The other thing to notice is the complete absence of any American vehicles, neither cars nor trucks can be seen.

This road has always been busy.  This location is now the junction of Footscray Road (Docklands Highway) and the Citylink Toll Road, a very busy spot.

A flood from the overflowing Wimmera River in 1960. A trusty Chamberlain tractor comes to the rescue of an early fifties Austin Loadstar with, possibly, a hanging meat van body.  On the other side of the flood a Commer semi-trailer awaits its turn, followed by another Austin or it might be a Commer Superpoise.

This must be a Sunday morning, men in suits and hats, ladies in Sunday best and hats, or maybe that is how people from Horsham dressed when going to see vehicles towed through floodwaters. Must have been the highlight of the day! 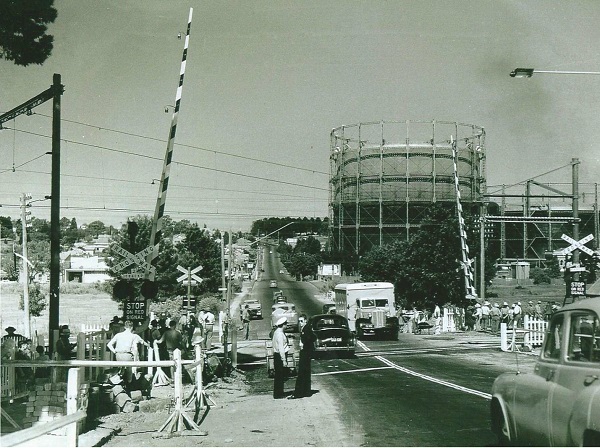 It is 1955 and a late forties Austin K5 series (the big one) is photographed storming the Toorak Road railway crossing. The gasometer may have gone along with most other things in the background but the faithful old railway crossing is still there to this day holding up traffic!

Contrary to perception, the large crowd around the railway crossing are not there to cheer the Austin on as it tackles the slight gradient before and after the crossing, they are Railway Gangers (Labourers). The Austin successfully completed the crossing three days later!! 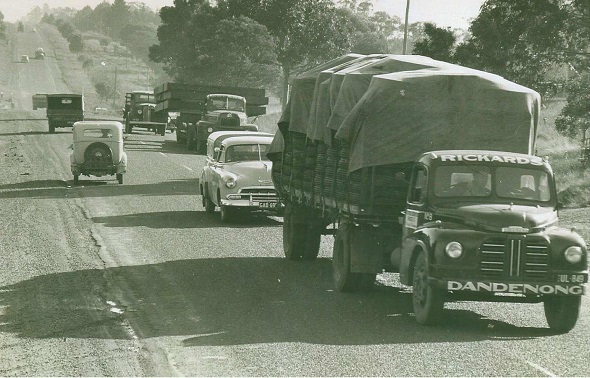 Dandenong Road, east of Springvale Road in 1952. A new Austin Loadstar semi-trailer, owned by Richards Transport of Dandenong leads this group of vehicles. The cargo of tyres would have been individually loaded and unloaded by hand. With so many of the tyres seemingly the same size I assume they are light truck tyres bound for International Harvester’s newly opened factory at Dandenong.

An International R190/200, operated by Green’s Transport of Melbourne, towing a low-loader follows the Austin. Notice the very wide load with no escort, no flags and only one chain to secure it!

A Morris Commercial, as usual, is the last of the group.