A brand new Ford–Thornton photographed in 1945 in Melbourne prior to its maiden trip to Alice Springs. This truck would have had the new 239 cubic inch V8 motor of 100HP @ 3800 rpm. Impressive and ambitious even more so, I don’t know how this truck performed, but carrying people in the front of the trailer and cattle behind them, and the dog trailer carrying freight and more cattle, it would certainly have had its work cut out. None too pleasant to ride in I would think. At the time it was state of the art and a reasonably comfortable ride to Tennant Creek from Alice Springs, its intended route. I wonder in what order it was loaded, cattle or people first? Some people probably objected travelling with cattle so close, but then some cattle can be pretty fussy too. 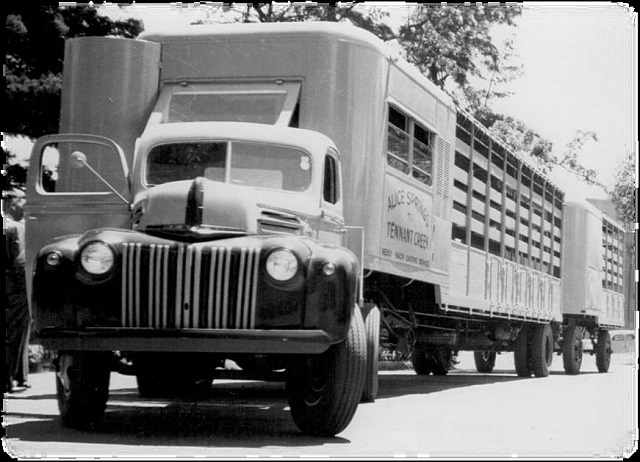 Heading to Melbourne with a load of general and some empty 44 gallon drums, this 1950 Ford V8 crests The Gap section north of Diggers Rest. A pretty rare sight now to see snow at this altitude as the Ford pushes on along the Calder Highway. Calder by name, colder by nature, and no heater! Incidentally, above the windscreen is written Miss Beryl. A common practice in those days was to place the name of wife, partner or children on the bonnet sides. Well all I can say is I think Beryl had her work cut out for her, as there are a few hills in this area and she would be doing it hard. 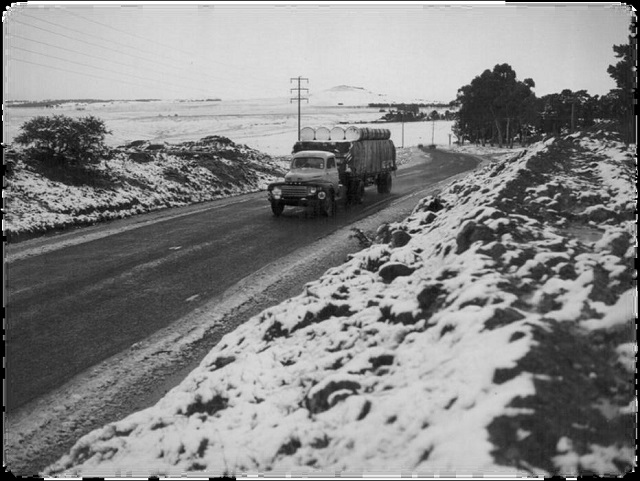 On the Princes Highway, near Laverton

not far from Melbourne, a circa-1950 model Ford V8 shown in 1952 with a load of wool bales. At two years old it is probably on its second engine! Longevity wasn’t a strong point with these engines. The trailer is a Spartan strap type and is a unit of Fry’s Transport of Geelong. There are no hills on this stretch of road so the old Ford could plug along here all day, throw in a few hills and it would have been found wanting. 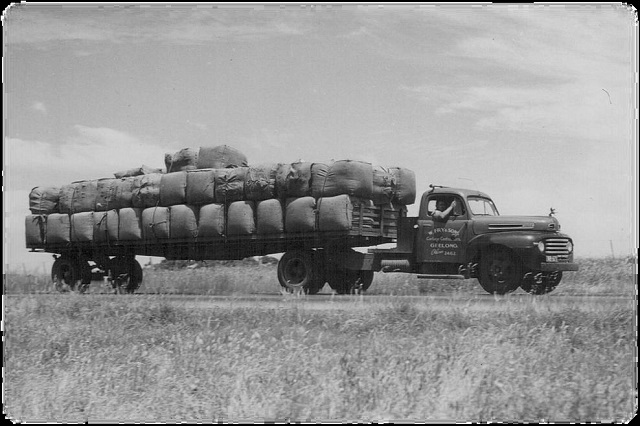 A fallen tree across the Hume Highway

on the northern side of Broadford is the reason for this line up. At the front is a very smart looking 1938 Ford Horse Float and one can only hope that the horses being carried added to the horsepower of the little 221 cubic inch Ford product. 85HP is all it could muster.

A couple of drivers are seen discussing the situation and everyone appears to be very relaxed. This is 1955 and the Hume here seems to have a pretty good surface. Two trucks back is a Diamond T, maybe a 520 series, from Shepparton loaded with pallets probably for fruit or fruit canneries. Either way, it seems like the start of modernization using forklifts and that meant less hand loading. 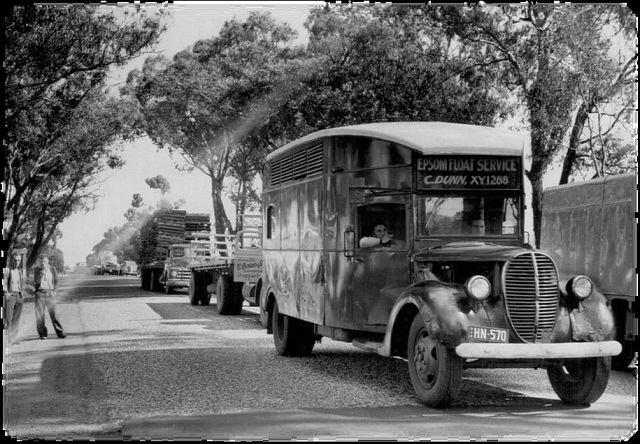