Back on the road I am realising more and more that I'm not covering the distance I have expected per day by a long shot and I had told my by understanding boss that I'd be back on the job by Thursday morning as I'm doing a ten year rebuild inspection on a JLG Boom Lift whilst doing servicing breakdowns on a couple of food processing customers automated machinery that I seem to specialise in these days. A long way from maintaining, rebuilding semi trailers, dollies and later B Double trailers for some leading companies back in the '80s and '90s in Adelaide, but that's a story for another time perhaps...

I've been hesitant to run the engine past 1950 as I've noticed a driveline rumble that's not the usual Maxitorque harmonic rumble, plus this thing's got a Road Ranger in it anyway. I begin to suspect either a worn Uni or jack shaft splines.

Coming down a long gentle slope I didn't notice the revs climbing to an indicated 2300, but what I did notice was a very smooth drive line. I immediately backed off to my usual 1950, but soon came to the realisation my speedo was exaggerating the truth, as even on the indicated over rev I didn't really gain on the two semi's in front of me even though my speed suggested I should've been...

As the afternoon was soon about to become evening, I was approaching Eucla Pass, which reminded me of a vivid memory of one of the burnt out wrecks I had purchased back in the mid '90s from one of my customers. Unfortunately there was road works there at the time and the driver of the wreck was over taking a road train, got into some trouble and couldn't avoid another oncoming road train. Apparently the fire burnt for 3 days before they could clear the wreckage, so I was quite cautious through there through to Border Village. It was well and truly dusk by the time I went into the road house for a break, the food smelt great and the atmosphere felt good, but I had set a revised goal for the day to reach Nullarbor Roadhouse for the night.

I thought to myself whilst looking at the souvenirs that I'd grab myself something, when I spotted an "I crossed the Nullarbor pin" I thought I'd reward myself early as I was pretty sure I was past the worst of it by now.

Walking back to my old Mack with the sun setting behind her I grabbed this pic that I really quite like.

Whilst taking the pic, I hear a gruff voice behind me saying "mate, is that your Ol Beauty?" 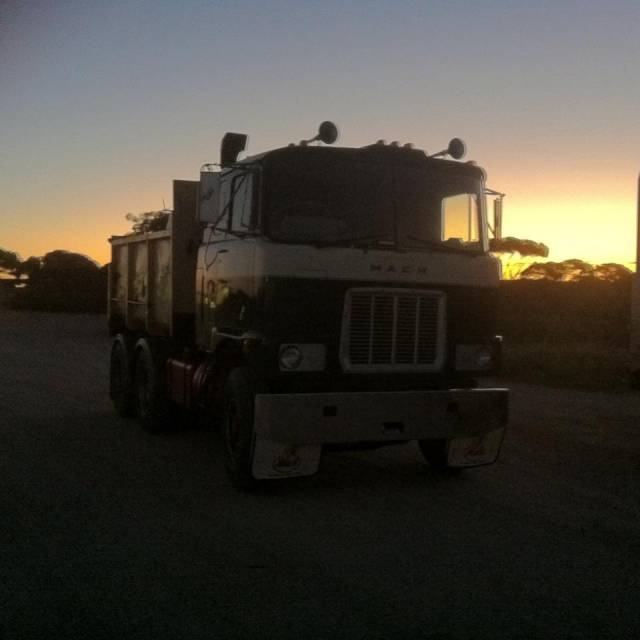 We introduce ourselves and he immediately starts calling me Rolly, which is what all the truckies used to call me when I was a kid growing up around them. He tells me all about his Flinstone Mack he has at home near Perth that he's doing up and asks if I'm going to keep the old tipper body on it. I reply most probably not as I reckon I'll most likely fit a beaver tail for my old race car. He replies F... Me! I wished I had met you sooner as I'd have bought the C... off you in Kalgoorlie and put the Effing thing on my Flinstone. We had a look around her a little more and he told me how beautiful my old girl is and then shows me his escorted wide load that's he's parked up for the night.

He asks if I'm staying for the night and invites me to join him around his little portable fire and have a grilled steak with him. I was very tempted by his kind offer, but told him about my delays and tight schedule, so I gave him my card, shook hands and bid him farewell. Such a character...