The old girl was humming along nicely this morning and I was enjoying listening to Englebert Humperdink and I started thinking about how most of his big hits were really quite sad stories. I had grown up with his music, along with Dean Martin, Tom Jones, Nana Mouskouri etc, so it was great to enjoy them again on such a nice drive. The roads weren't as wide as in WA and not quite as smooth, but still pretty good for what was basically a bobtail short wheelbase Mack prime mover with a 44,000lb camelback suspension.

The words of the previous owner Benny reminded me not to chase the steering "you just sit there and hold it, it steers really well..." were spot on. The more I relaxed the better the truck felt. At some stage, being an American built F711 with the conversion shaft drive over to the right, someone had upgraded the power steering box. It's quite a neat conversion and all the joints seem to be in good condition, so there was really no need to saw away at the wheel. Even if I had to go right over to the left shoulder and beyond for oversized loads coming the other way, provided I didn't preload the steering too far to get back on the black stuff, the truck has proved to be extremely stable and responsive. Due to not driving heavy vehicles that often I had up until now been really concentrating hard to ensure I was holding my lane well and checking where I was positioned using the mirrors.

Somewhere near Yatala, off to the left I saw this massive Kalari triple road train about to enter the road in front of me, so I started to back off thinking he'd need lots of room to join the highway and that he'd also be faster than me. 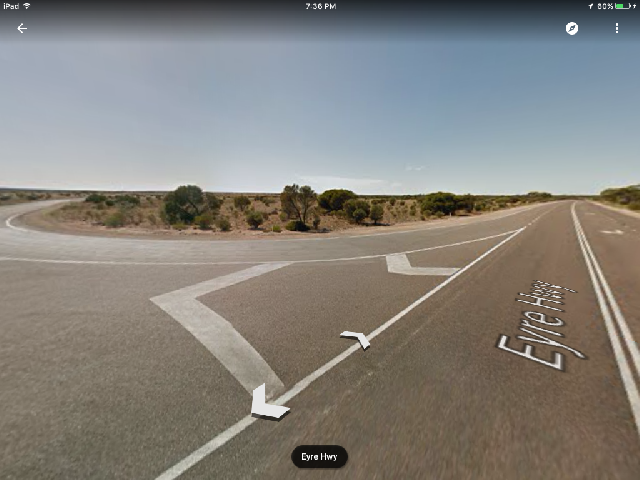 He easily held the long purpose built merge lane and as I approached down to about 60k and I found he was still going quite a bit slower and still had quite a bit of his merge lane to go, so I passed him easily and we waved as I overtook him.

A while later, I saw the flashing lights of an escort vehicle coming towards to and could make out a massive oversized float that would need all of the road, so I indicated left and worked my way down through the gears, once again without a crunch. I pulled off the road completely and was surprised how at the condition of the wide run off, so at walking pace I went to the left of the marker posts and just idled forward as the wide load passed.

I thought I'd better get the Ol girl going as surely the road train would be gaining as well be on a tight schedule and would be rounding me up once we got back on the flat. For road trains and others, I had at times signalled them passed and slowed up once they had started to overtake to help things along for them.

My bladder decided we would need to stop in the next township of Penong, and the triple had not reappeared in my mirrors. So I eased up and pulled into the truck and car parking bay with loos and water just on the western end of town.

Left the old girl to idle down and was walking back from the loo when a young guy about to leave in his 4wd drive ute with a decent sized genset and welder in the back nervously asked if there was diesel available at Nullarbor. I assured him there was. He was on his way back from the mines in the north of South Australia at the end of his contract to his parents home in Perth. I asked if he had enough fuel and money to refuel there and his smiled a rare gold toothed smile and confirmed he was right for money and fuel, provided it was available at Nullarbor. I told him about Nullarbor Roadhouse, we wished each other well and he went on his merry way.

I was almost back to my truck when the road train caught up in this picture and parked next to me. 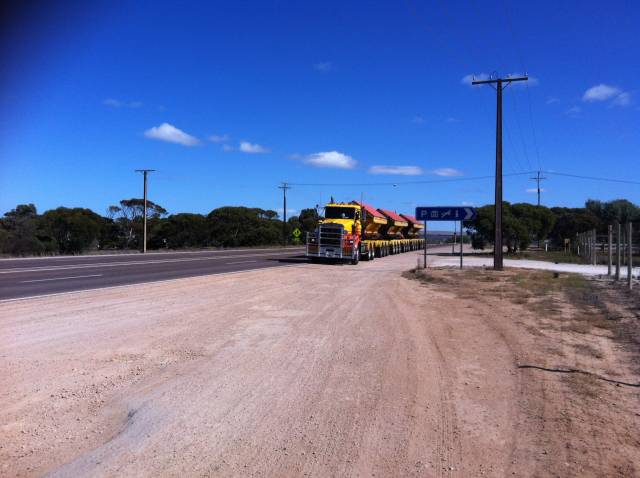 We waved to each other again and I decided to check all tyre pressures before leaving.
The road train driver was out of his vehicle too and was doing a walk around, I looked up just as he finished and was about to walk to the local cafe for a coffee.
He looked tired and I was surprised at how young he looked, we waved at each other and by the time I'd finished what I was doing he was walking back with a massive coffee. I walked up and we introduced ourselves. He explained he had to stop for two minutes for the wide load and unfortunately it put him out on his breaks and would have to wait another 45 minutes before he could leave due to live tracking etc.
We got to chatting about his job and the 135 tonne triple he was driving and then we got on to old cars, his a VL Exectutive Turbo manual that he was doing up in Adelaide and my early RX7 race car back in Sydney. His name is Dylan and is the youngest triple road train driver in the fleet at 26. 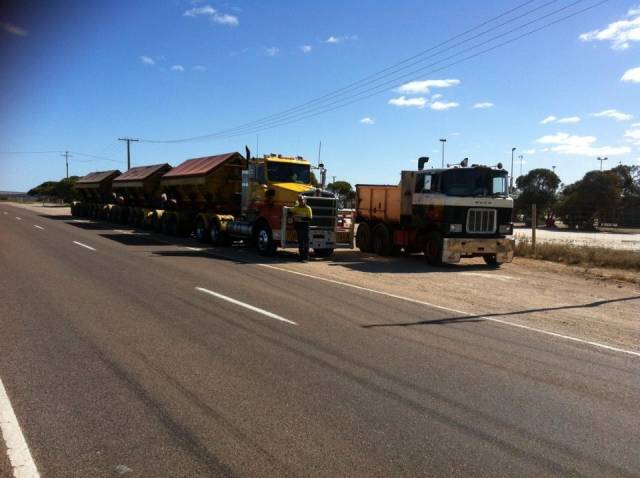 I moved my truck up to his for the photo and as his break was nearing an end I thought I'd better get a move on as he was speed restricted to 87kph and had to stop not only for his mandatory break, but also because both cabin cameras and alarms had triggered due to slightly drooping eyelids. He also showed me some of the other live cameras fitted and told me about the Bluetooth system for individual axle weights in the cab. We said goodbye and got on my way towards a fuel stop and lunch at Ceduna.