There's only one B Double, the orange/silver trailer and dolly, plus one other prime mover over the other side of the parking lot. It has me wondering if this is the place to sleep with so few trucks around, plus there's bright lighting covering most parts of the lot.

I started up the Ol girl to build up some air whilst scoping out the yard for a place to park that won't have light shining directly into the cab and as far away from the road as possible, whilst the little boy in me says not to park over in the far dark corner…

I settle for a spot over near the side access road as it is out of direct light and seems quiet enough. A bit of a tidy up of the bunk, passenger seat and between the seats to make room for a bottle of water, the booster pack to charge my iPhone overnight and a place to stash my reading glasses out of harms way. These F Models have shrunk since I was last in one when I was 12 years old. I'm only an average height, slim guy and it's really tight in either seat to comfortably remove my zip sided Mongrel work boots. There's still two shoe box sized speakers attached, one behind the driver up on the top of the rear panel in the bunk and the other bolted down in the bunk right behind the passenger seat. So the mattress is kicked up over that which means I can only stretch out slightly offset to the rear of the bunk, so that's gets added to the gonna do list for removal.

As I'm sorting my Mack Motel room out, some young travellers park next to me for what I assumed is the same reasons for the night. I finally climb into the bunk and enjoy surfing Facebook etc for awhile, but once again the Land of Zed is calling. I SMS Patricia gnite, turn everything off, lock the doors with only the quarter windows and roof vent open for some fresh air.
The bunk is still heat soaked from the days travel, so I drift off to sleep quickly basking in the warmth with a full tummy.

Beep beep beep… It's 1:30am, I awake slowly whilst trying to make sense of what I haven't turned off properly. I'm scourging around reaching for phones, iPad, dash cam, whatever I can think of what the hell is beeping. I eventually realise the noise isn't in the cab, but coming from outside. There's another car parked next to me now, so I put my boots on and climb out of the truck expecting to find one of the cars making the noise. My neighbours also wind their windows down and peer out wondering the same. One of them mutters in German that “he doesn't know” to his companion. I walk over to the roadhouse and the noise grows louder. The guys working inside are talking about the beeping noise from the pumping shed. I visit the bathroom and conclude in my daze that they'll figure it out soon enough. Soon enough turned out to be about 6am…

The sun’s rising, so I figure it's time to go have some breaky. I order my usual toasty with a long black whilst watching one of the morning shows. It's nice and warm, but the as nice as the place is this is not the Nullarbor. I wished the Nullarbor was all the way home, but have to make the most of what it is.

After breaky, I wander over to the accessories shelves and start looking at sealants. I noticed before breaky that the fuel leak has returned to haunt me, so I've decided to clean and patch the fuel hose with some fuel resistant silicone using the patch already made from hose, clamped on with cable ties. I also buy a small funnel set incase I need to top up the engine oil. I grab my overalls and get to it and am reasonably confidant of a good result. I then re assessed the roo damage, played with the bolts, nuts and spacers but can't improve on what I did roadside the night before.

I checked the oil, it's fine and add about half a litre of water to the radiator. A quick walk around and everything else looks ok, its time for a shower and hopefully the sealant will cure enough during that time. It's not cold this morning, but the rising sun is heating up the land, making it a bit windy.

I returned from my shower and start up the truck to see if my repair will hold. So far, so good! Whilst the air is building up, I checked the tyre pressures and get myself ready to go.
The compressor airline line repair is holding well and whilst sitting there I get out my iPad for a final look and confirm to myself that I'll cut across to Mildura and then the Hay Plain that I'm reasonably familiar with. The sun is warming up the cab, So as I'm about to drive over to the bowsers to top up the fuel, I start winding my window down. It's been getting easier to use at the trip progresses, so I just wind it all the way down and then Clunk!

Brilliant, the window has fallen out of its mechanism into the depths of the door. Just what I need! I turn off the truck and go grab some screw drivers and pliers. As I'm undoing the access panel and trying to figure out what's what, I discover some of the screws aren't keen to move. I don't have a good feeling about this and rain is forecast for around lunchtime into the early afternoon along my route.

Surely after making it across the Nullarbor this isn't going to beat me? No matter what screws I undo, including removing the inner window frame I can't remove the mechanism and panel. The Bailey Channels need to come out too, shit!
The mechanism is starting to drop into the door as well, I can't get my hands in anywhere to be able to lever the glass up either. Come On!!!

I decide to grab a bottle of water and take a step back. I grab some smaller screw drivers, work the mechanism back into place and secure it with some screws. Naturally I've dropped some into the dirt too… There's an smallish round access hole below the panel that seems to be too small to get my hand through. I have visions of jamming my hand in there, becoming stuck and then having to try and use my phone to call for help.

I remind myself the key to getting out of a tight access is to remain calm and slowly work my way out. I've worked inside some really tight spots with my confined space training and usually cope well, so I slowly work my hand into the access hole and start to work the window glass upwards. It takes some doing and a few attempts, but I did my best to stay calm.
The glass is finally sticking up into the frame, back into the partially failed Bailey Channels. So I grabbed my wire cutters with my spare hand and jammed the rubberised handle between the door frame and glass in the hope it'll prevent the glass from falling back in.

Next I work the old work mechanism back under the glass. Two thirds of the bottom locating channel has rusted away and upon closer inspection, I find it has been siliconed to the glass once before. The mechanism is way past its best, but I eventually coax it to back into position. I'm somewhat confidant that it's now actually holding the glass, so I start fastening the panel back to the door. I took a deep breath and wound the window up slowly whilst keeping the wire cutter handle in place loosely, just in case…

The window is right up now, but I can see it would easily fall out again. I grab the tube of silicone, jam the handle back in to hold the glass and wind the mechanism down a tad. I removed as much rust, dirt and old sealant as I could with a screw driver and applied a good thick bead of sealant into the remaining channel section as well as a good layer on the rusted sections. I carefully wound it back up ensuring the window was in position as best as I could and then smoothed the silicone over both parts. I resigned myself to possibly driving the rest of the way home with my window up, but on a positive note at least I'd be able to keep the cabin closed in the expected rain.

As I made my way back over to the bowsers to refuel, I notice the what's written on the tool box of the orange and silver trailer and dolly… 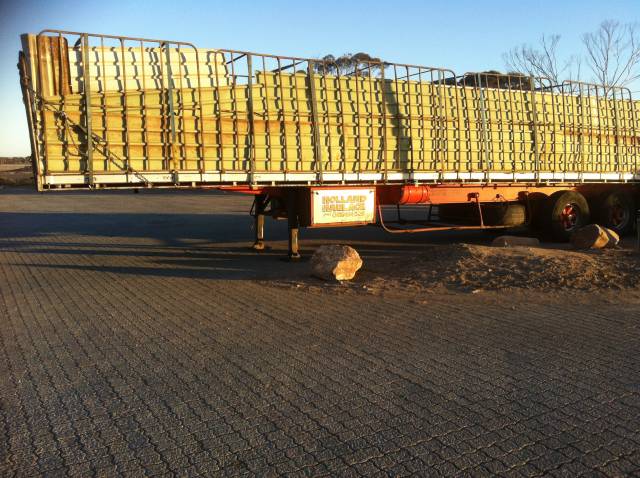