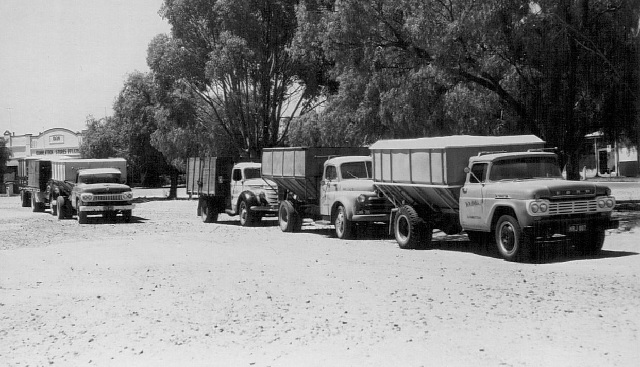 The switch to transporting wheat in bulk transformed the way it was handled. The main attraction was no more back breaking lifting and stacking of bagged wheat. Bagged or bulk still involved the inevitable queuing up. This little line up is at the Quambatook rail siding and silo area, 300 kilometres north-west of Melbourne.
First in the line-up is a 1959 Ford, then a 1952 Dodge, a 1937 or 38 ‘D’ Model International and finally a 1958 model Ford.

(Quambatook is famous as the Tractor Pulling Capital of Australia and the birthplace of country singer, John Williamson. Gerry Laws). 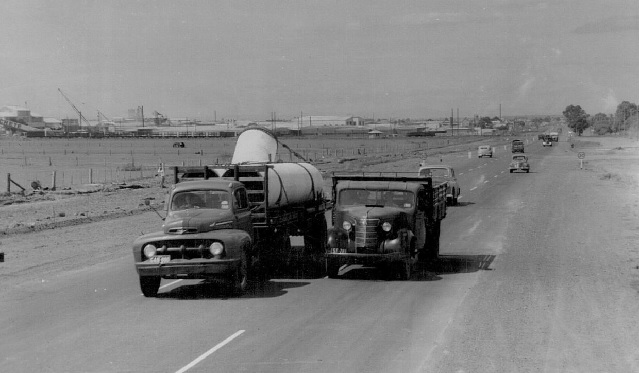 This photo was taken in 1954 just on the outskirts of Melbourne on the road to Geelong, a regional city 60 kilometres south west of Melbourne. A Geelong bound 1953 Ford with a load of large steel pipes is in the process of passing a 1938 Maple Leaf market gardeners truck. Not your standard cabin on the Maple Leaf either, with the widened cabin to allow the driver to stretch out and have a sleep if arriving at the market in the early hours of the morning.
This was often the case, or sometimes before they headed home again. We can only guess how many miles the Ford had to stick with the Maple Leaf before gaining enough speed to actually complete the passing manoeuvre. 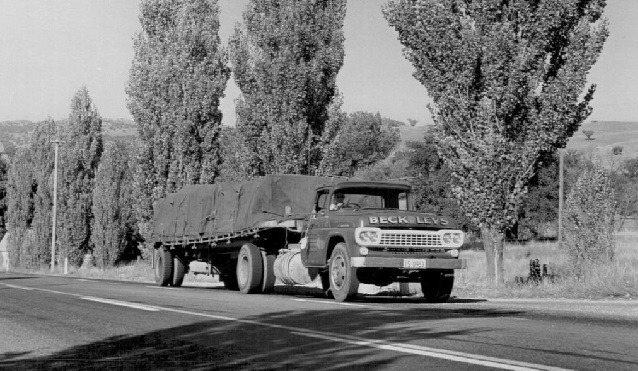 Poplar trees line the road on Jugiong Hill, just south of the town itself on the Hume Highway. A 1958 model petrol powered Ford V8 creeps up the hill getting closer to Melbourne inch by inch. It is owned by Beckley’s Transport of Geelong and judging by the bow in the round fronted trailer it was probably loaded to its maximum carrying capacity which was about 12 tons. I think the old Ford would have been a frequent user of the ‘slow-lane’, as there are a lot of hills around this area and the V8 petrol motor would have had a distinct dislike for them. This snap was taken in March 1960. 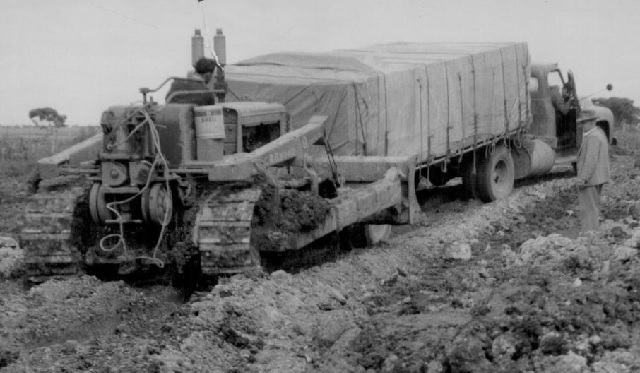 This is the Calder Highway just north of Culgoa in 1956, about 320 kilometres north west of Melbourne in the Mallee area. The image shows the detour track around it while an upgrade is carried out! Assistance required here for the 1954 Ford V8 as it negotiates the stony and boggy terrain. Under the tarp is a full load of oranges bound for Melbourne. Some unkind observers believe the Ford was always in need of assistance, even on the flat! 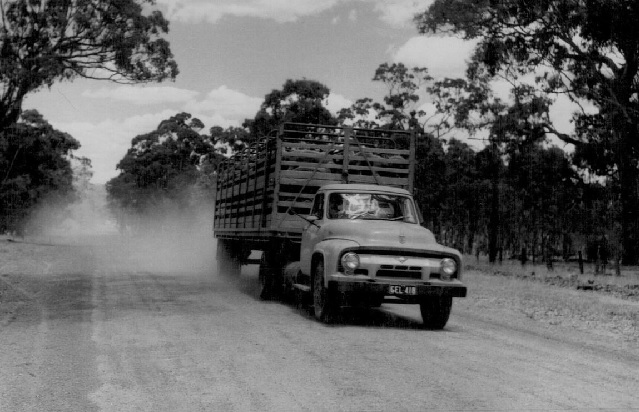 Believe it or not this is the Henty Highway in 1955, between Horsham and Hamilton about 300 kilometres to the west of Melbourne. The photo highlights the inadequate state of the major roads at the time. Money was still tight and the building boom was in full swing, so funds for infrastructure were stretched to the limit. An almost new 1954 Ford V8 powering along with two decks of sheep doing its best to stay ahead of the dust cloud it is creating. A well compacted road surface, but still not bitumen.